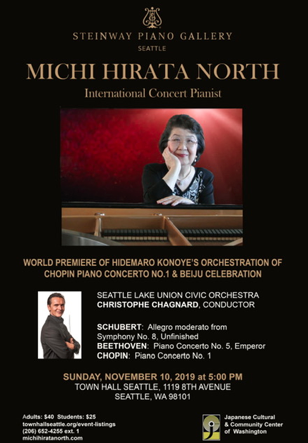 Michi Hirata North made her piano debut in 1938 as an eight-year-old prodigy.
Let me share the story of some of why Michi Hirata North, pianist, is performing this “Beiju” (88th birthday celebration) event and honoring Hidemaro Konoye with her Town Hall concert on this 2019 November 10th. There are three main reasons.

The first is that Mr. Tanaka, temporarily in New York, saw Sam Goto’s cartoons of Michi for her last concert at Meany in the North Am Post four-years-ago. Tanaka-san emailed me and said he had been looking for Michi and would I send her contact information to him. Subsequently, he returned to Japan and shared the CD with his friend Mr. Tawara - whose work was diplomatic relationships with Russia, but his hobby is of collecting a vast amount of memorabilia of historical musical professionals in Japan.

Mr Tahara wrote Michi saying, “I saw you perform as a teenager in the late 1940s. I’ve been looking for you for 65 years.” Michi is one of the only ones still living from the WWII era of well known musicians. Mr. Tawara has close relationship with Kingstudio.asia. They immediately produced CDs for distribution from Michi’s concert. The studio executives are excited about getting an even better recording for posterity. Tanaka-san called Michi in September to say he is coming for the concert, from Japan.

The second reason for this concert is Michi reconnecting with the granddaughter of Hidemaro Konoye and the Konoye Foundation of Music. Hidemaro was the younger brother of Fumimaro Konoe (don’t know the reason for different spelling of last name). Michi was in their home on December 17, 1945, when Fujimaro committed honorable suicide as the pre-war Prime Minister of Japan who got Japan into the war with the United States.

Hidemaro was Michi’s father’s best friend. They studied in Germany together in the 1920s. Konoye is known for founding the New Symphony Orchestra of Tokyo (the present day NHK Symphony Orchestra). At the end of WWII in Germany, Konoye as one of the guest conductors of the Berlin Symphony Orchestra was isolated by the US government as the US/Japan war was still raging. He was repatriated through New York and chose to return to Michi’s home.

Michi was 13-years-old when Konoye was staying in their home in Tokyo and now she says: “Up to his visit to our home in 1945, I was obediently practicing, but Konoye inspired me to become more excited about music and performing. I traveled all over Japan with him and his orchestra from ages 14 to 18.” Michi is honoring Konoye with his orchestral composition for Chopin Piano Concerto No. 1.

The third and most remarkable part of the event is that Michi is turning 88-years-old this December 2019. Imagine, playing two 40-minute concertos, all on one November 10th Sunday afternoon and we get to be there??

That's me on the right during one of the sessions.
Pleased to follow-up the delightful and well organized History Keeper’s Workshop last Saturday in Kent, WA. As I think about my weekly blog, I am thinking of “incident - point - benefit”.

Watching an NHK TV program this morning about Seattle's international make-up and beauty, it is inspiring me. They are showing the workers throw fish at Pike Market. They are showing the trees in downtown Pioneer Square area as well as the glass blowing shop down there. They interviewed this family from Iran dancing in Westlake Mall. The Recreational Tree Climbing company is showing how kids can enjoy Volunteer Park. It’s a series of short stories and helps me get excited about living here.

It occurs to me the same thing happens when I do research and write stories about my family. I found my father’s aunt was an opera singer in famous Hibiya Hall in Tokyo. I found out my Grandpa was one of the 100 Dairy farmers in Orillia, right there by Ikea, that once supplied half of Seattle’s milk supply around 1915 - 1920. My mother was born around the south end of South Center Mall. Most of us will be buried in the Kent Hillcrest Cemetary. It helps our grandchildren be more excited about being part of the family. 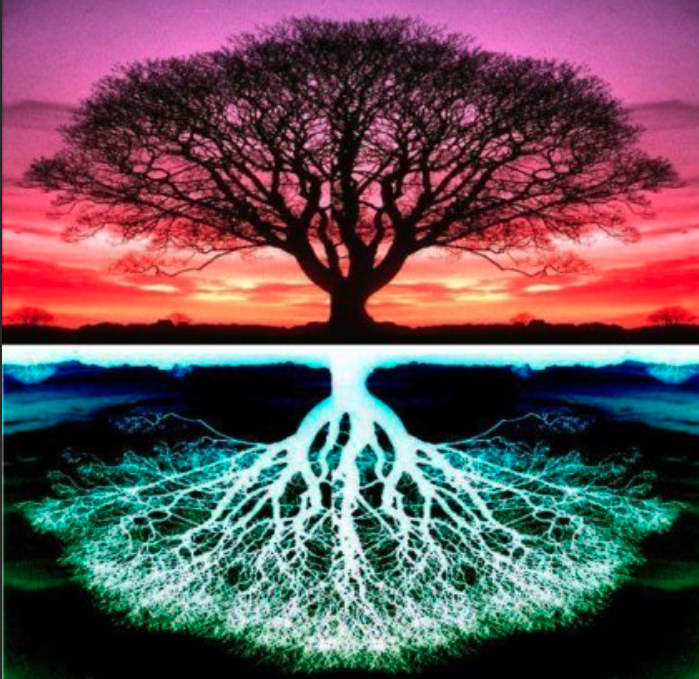 APPRECIATING OUR HERITAGE
BUILDING AND CREATING BEAUTY IN AMERICA!
My ancestors came from Japan for economic and individual freedom. The NHK-WORLD TV documentary, I’m watching, is about this family in Japan. The family is passing on the art of designing and weaving Obi (Japanese kimono sash) to the next generation.

The programming of NHK regularly features artists who keep original and historical ways. For instance with cooking, it includes growing and acquiring ingredients, bringing out best of flavors, making it exciting to the eyes and adding a modern twist.

I find myself appreciating my Japanese heritage values of attention to nature, integrity and responsibility. This beauty, comes from centuries of a homogeneous existence and attention to culture during 1600AD to 1800AD without wars.

There is beauty in BUILDING AND CREATING and DIVERSITY. A definition of diversity that I like is: “the ability to challenge each other’s beliefs while keeping our dignity and respect for each other”.

Living a life of beauty, incorporating diverse beliefs, is a challenge that I love! Beauty can be incorporated into each step of the process of living our daily lives. I have no desire to live in Japan. How can I pass these splendid elements of heritage on to future generations here in Seattle?

The most important way to live a life of beauty is to use the POWER OF STORY TELLING!! 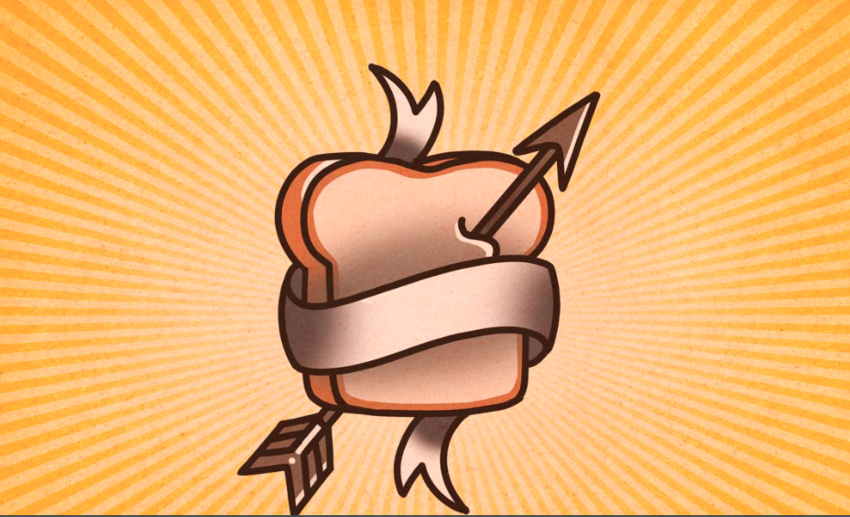 Dave Dahl’s story inspires me to continue to build and create the legacy and stories that I weave and write for those who choose to benefit, but I particularly have my great grandchildren in mind.